Excerpt: "The agents also seized a stash of THC edibles and a vial of injectable testosterone."

(AP) . . . Among them was Lonnie Leroy Coffman, 70, an Alabama grandfather who drove to Washington to attend Trump’s “Save America Rally” in a red GMC Sierra pickup packed with an M4 assault rifle, multiple loaded magazines, three handguns and 11 Mason jars filled with homemade napalm, according to court filings.

The truck was found during a security sweep involving explosives-sniffing dogs after two pipe bombs were found and disarmed Wednesday near the national headquarters of the Republican and Democratic parties. Coffman was arrested that evening when he returned to the truck carrying a 9mm Smith & Wesson handgun and a .22-caliber derringer pistol in his pockets. Federal officials said Coffman is not suspected of planting the pipe bombs, though he was charged with having Molotov cocktails in the bed of his truck.

His grandson, Brandon Coffman, told the AP on Friday his grandfather was a Republican who had expressed admiration for Trump at holiday gatherings. He said he had no idea why Coffman would show up in the nation’s capital armed for civil war.

Also facing federal charges is Cleveland Grover Meredith Jr., a Georgia man who in the wake of the election had protested outside the home of Republican Gov. Brian Kemp, whom Trump had publicly blamed for his loss in the state. Meredith drove to Washington last week for the “Save America” rally but arrived late because of a problem with the lights on his trailer, according to court filings that include expletive-laden texts.

“Headed to DC with a (s—-) ton of 5.56 armor-piercing ammo,” he texted friends and relatives on Jan. 6, adding a purple devil emoji, according to court filings. The following day, he texted to the group: “Thinking about heading over to Pelosi (C——'s) speech and putting a bullet in her noggin on Live TV.” He once again added a purple devil emoji, and wrote he might hit her with his truck instead. “I’m gonna run that (C—-) Pelosi over while she chews on her gums. … Dead (B——) Walking. I predict that within 12 days, many in our country will die.”

Meredith, who is white, then texted a photo of himself in blackface. “I’m gonna walk around DC FKG with people by yelling ‘Allahu ak Bar’ randomly.”

A participant in the text exchange provided screenshots to the FBI, who tracked Meredith to a Holiday Inn a short walk from the Capitol. They found a compact Tavor X95 assault rifle, a 9mm Glock 19 handgun and about 100 rounds of ammunition, according to court filings. The agents also seized a stash of THC edibles and a vial of injectable testosterone. 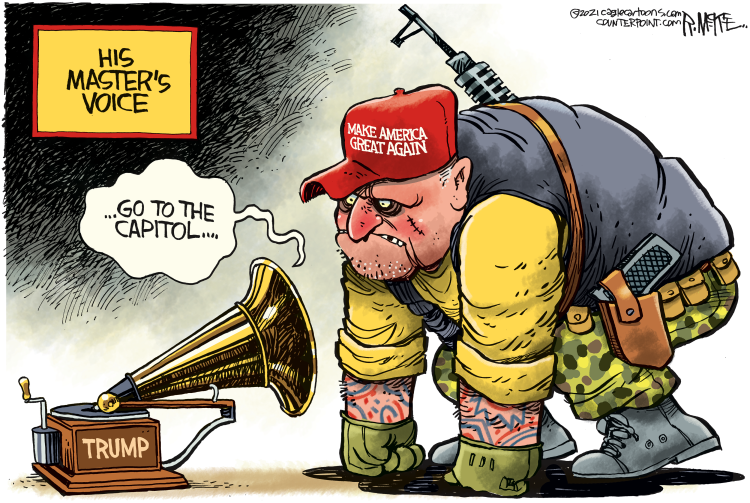